Justice for a Victim of the Coercive Conversion Program Religious Freedom between Australia and S.Korea

What is freedom? What makes freedom so powerful that it compels people to fight for it when it is about to be taken away from them? If you look at world history, how much has our civilization been shaped through wars and revolutions where people have given their lives to attain and maintain at least some sense of freedom? In Australia, a country that is isolated from the rest of the world, there is an environment of peace where one can have political and religious freedom without any interference from the government. Its citizens are privileged to be able to speak publicly and to participate in peaceful protests against acts or issues that they view as immoral or unjust. However, is this freedom something that perhaps those living in Australia have taken for granted and have thus limited their view of the outside world? Do you know that around the world today, freedom is still being taken away from many people? Have you heard of the young sister Ms. Ji In Gu and the Coercive Conversion Programs? 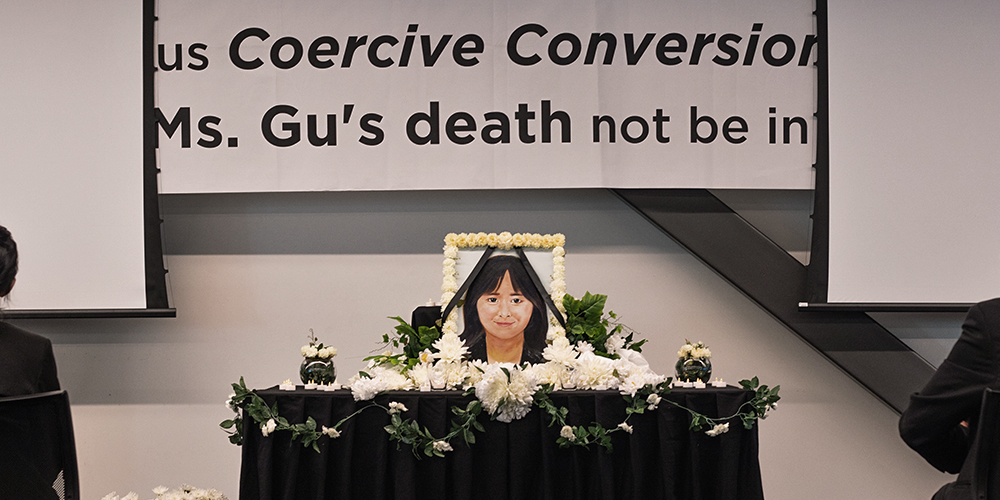 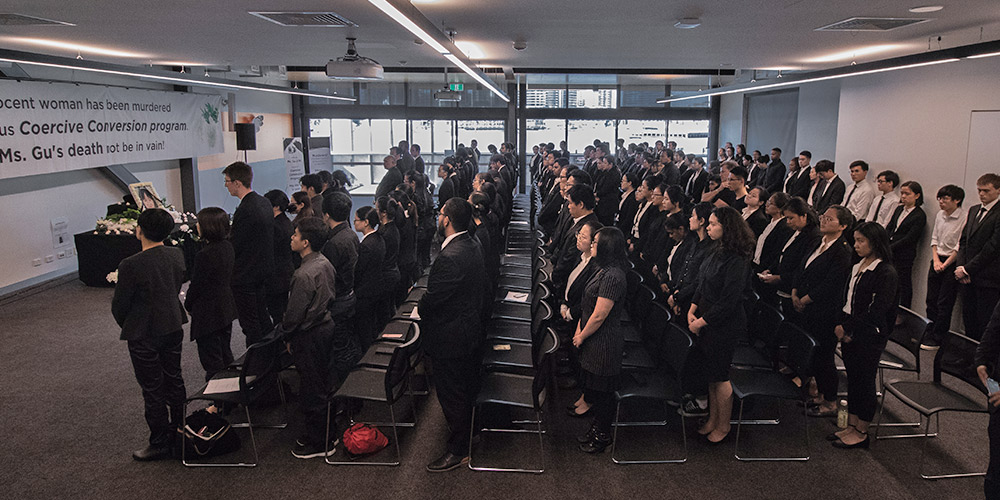 A memorial service was hosted by the Human Rights Association for the Victims of the Coercive Conversion Programs (HAC) in Melbourne for the late Ms. Ji In Gu, a victim who lost her life as a result of the coercive conversion programs in Hwasun, Jeonnam, South Korea. The event was held in Docklands Library on Sunday January 13th, to not only offer respects, but to also create awareness of the outrageous and horrific tragedie that are still unspoken of within the public sphere.

With an estimated number of 160 participants, including Global Preacher Pastor Nelson Pervaz (RMIT University Chaplains), and Chinmaya Mission Melbourne’s Anok Tirlapu, the public gathered along with others from 23 cities in 15 countries (LA USA, London UK, Auckland New Zealand, Essen Germany, etc.) around the world for the anniversary of her death, to ensure her death will not be in vain. This was also held to bring light to these illegal programs that are not commonly voiced within the nation of Australia.

Ms. Ji In Gu (27), who lived in Gwangju (South Korea), was killed by her parents under the direction of pastors who would coerce them to commit acts such as forcefully kidnapping, confining and physical violence. By using her family members the pastors ensure that they are not legally held responsible. After enduring confinement in a secluded area for a period of 44 days, Ms. Gu was suffocated to death by her parents.

Since then, 120,000 citizens of South Korea rallied to advocate for the punishment of the conversion pastors and for the coercive conversion programs to be banned by law. In response, the global family has passionately supported religious freedom in South Korea and held demonstrations in various cities, including Cape Town, South Africa and Los Angeles, America.

The pastors from the Christian Council of Korea (CCK) who are the real culprits of these murders, have abused their authority for monetary gain through the victims’ parents, in order to convert their child into the parents’ desired religion, or to a denomination registered under the CCK. It is a clear violation of the universal human right to the freedom of religion. South Korea is a nation where religious freedom is protected by the constitution, however in everyday life, discrimination and judgments occur within the society due to disagreements between different groups and beliefs, which has pave the way for coercive conversion programs as well.

We may not be aware even if these programs are happening in Australia without our notice. Such a situation should never be overlooked. 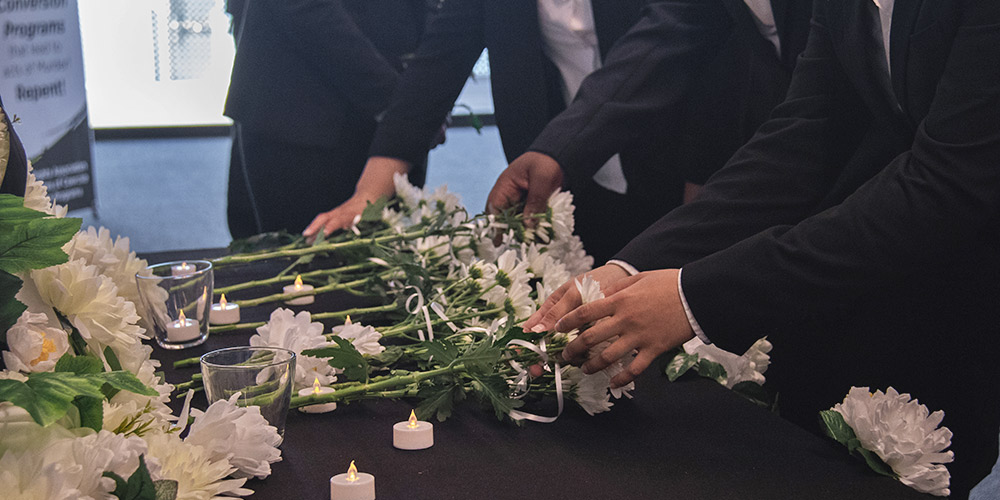 Memorial tribute held not only to commemorate the murder of Ms. Ji In Gu due to the coercive conversion program, but also to raise awareness of the issue of religious freedom.

Global Preacher Pastor Nelson proclaimed, “Listening to concerns and feelings is important in a community or estate. Religious freedom protects everyone, it is a fundamental right. People of faith and people of no faith need freedom.”

“I just remember the story of Stephen (in the bible), the first Christian murdered…The quality of Stephen and of Ms. Ji In Gu was they were full of faith and wisdom. (Let us) Do to others as they would do to you”

Through these Coercive Conversion Programs, two people have been killed including Ms. Gu. Another victim, the late Ms. Seon-hwa Kim, was killed in 2007 by her husband who hit her in the head with a hammer following her refusal to undergo coercive conversion.

According to HAC, approximately 150 Korean citizens in the past 10 years have been abducted and placed in danger of physical harm where they must risk their own lives as a price for refusing to change religions.

Innocent lives are being threatened due to the fact that they are not part of the mainstream Christian denominations.

“Ms. Ji In Gu’s death and many other incidents of coercive conversion around the world happen because of the ‘good intentions’ of corrupt religious leaders and the support that these leaders have from ignorant or uninformed parents.”

“…And so, bringing this incident closer to ourselves and making it personal to each and everyone one of us here…if we cannot muster our own strength (to ensure our good intentions have strong foundations of Human Dignity and Freedom of Choice), then maybe the best thing to do is keep our good intentions to ourselves” spoken by Anok Tirlapu.

HAC wants to pay tribute to those who have lost their lives through coercive conversion programs that are operated by the CCK, honouring one of Ms. Ji In Gu’s final words to the Korean president, “Please help innocent people by legislating a new law that does not discriminate against religions.” 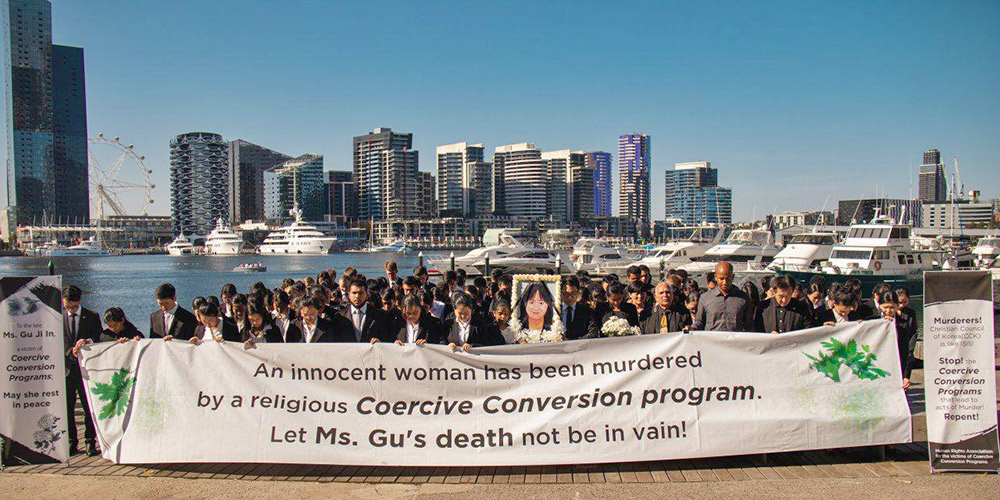 A moment of silence for Ms. Gu’s death at Docklands, Victoria, Australia

Please help spread the news of this unjust practice in order to educate and prevent another victim from losing their life again.

HAC aims to create awareness and unite people from all religions, denominations and backgrounds to stand against human rights violations and to join hands against these crimes against humanity.